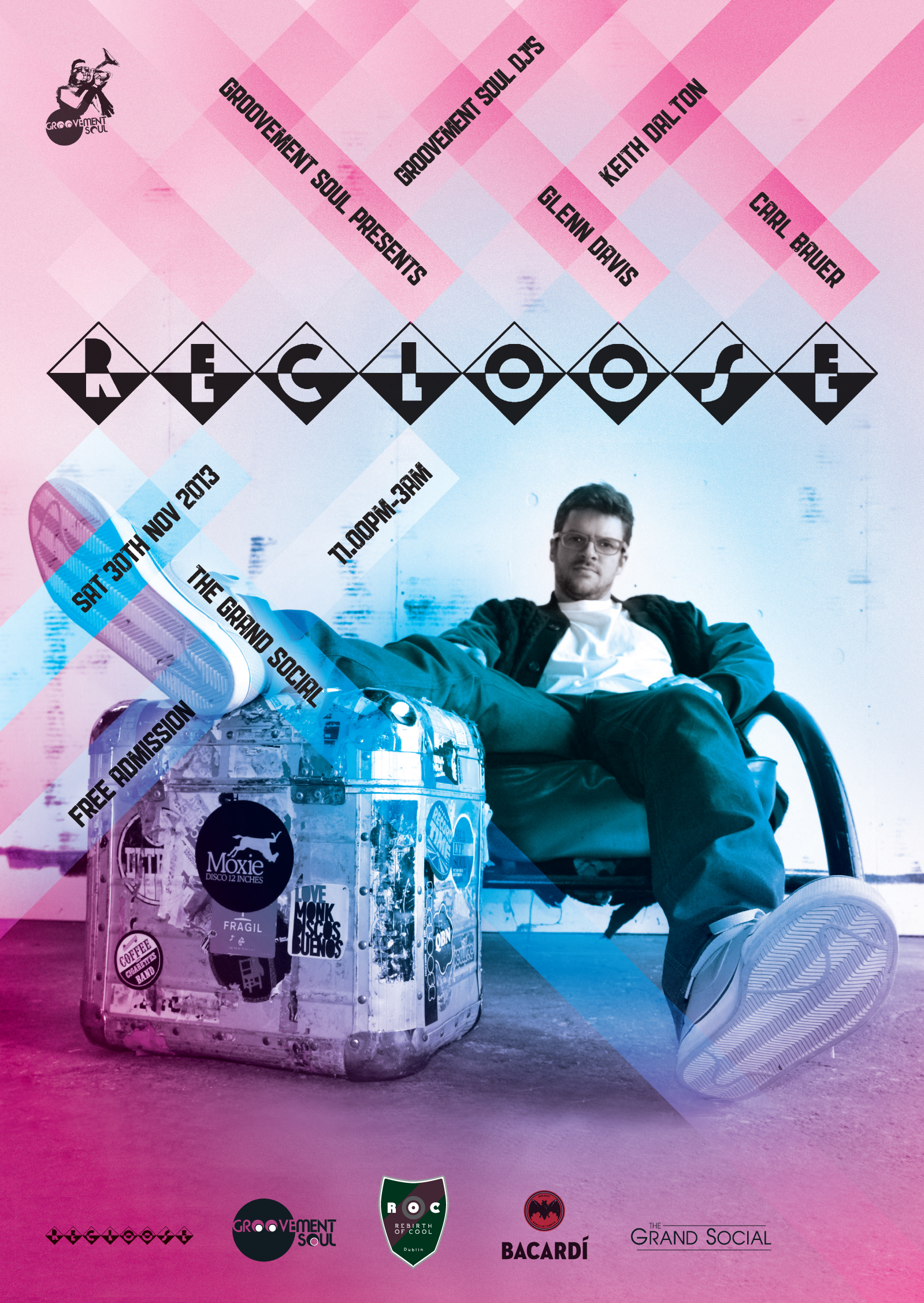 Well Recloose needs no introduction when it come to quality underground music (Full bio below;)
Get in early people it’s gonna be jammers…..

We want to thank the good people at  Rebirth of Cool, Dublin’s freshest new clothes shop, for helping us bring this party to you.

Recloose Bio:
It all started in the spring of 1997 when Detroit native Matthew Chicoine, aka Recloose, made contact with techno pioneer Carl Craig by way of a legendary ‘demo-on-rye sandwich’. This fateful meeting led to the signing
of Recloose to Craig’s seminal Planet E label and the birth of an eclectic and vibrant musical career.

Recloose’s musical roots trace back to eight years of studying music and playing jazz saxophone, later shifting his focus to the art of collecting and mixing vinyl while at the University of Michigan. His eclectic DJ sets, which
were first heard on Ann Arbor’s WCBN, have led him to become an indemand DJ, playing at clubs and festivals around the world as well as performing as a turntablist for both Carl Craig’s Innerzone Orchestra and the more esoteric Uri Caine ensemble.

Over his fifteen-year career Recloose has developed into a true standout of Detroit’s musical litter. To date he has released a number of groundbreaking 12”s for Planet E and Rush Hour, a host of remixes for the likes of Funkadelic, Herbert, Motor City Drum Ensemble, Tei Towa, Dennis Coffey, MJ Cole and Azymuth, a live album, and three full-length LPs debuting with ‘Cardiology’‚ on Planet E / !K7 in 2002, greeted with wide critical acclaim.

Recloose relocated to New Zealand in 2001 to plant new roots and explore fresh musical horizons. 2005 saw the release of Recloose’s second LP, ‘Hiatus On The Horizon’ (Peacefrog/Loop), an album that features a host of New Zealand’s finest musicians and vocalists (and spawned the
dancefloor stomper ‘Dust’ featuring Fat Freddy’s vocalist Joe Dukie). This was followed in 2006 by the Recloose Live Band’s funk compendium ‘Backwards and Sideways’, recorded live at the San Francisco Bathhouse and released on Recloose’s on-off imprint ‘Fingertips’ in early 2007. Recloose’s 2008 international long player, ‘Perfect Timing’, features yet more stellar New Zealand talent (including Tyna Keelan, Rachel Fraser, Joe Dukie, Jonathan Crayford) and took out the prestigious Tui Award (aka NZ Music Award) for best Electronica/Dance album of 2008. In 2010 Recloose teamed up with long time musical comrades Rush Hour records to release “Early Works”, a retrospective collection of standout and lost material from his days in Detroit. Since then he has been continued to
release a number of ambitious 12″s on Rush Hour and Delusions of Grandeur.

In 2009 Recloose launched his Hit It & Quit It radio show, broadcasting with broadcast partner Frank Booker every Monday from Auckland’s George FM and quickly growing the show into one of the highest rating on the station. In 2010 Recloose took up residence at Auckland’s Music and
Audio Institute of New Zealand to set up and deliver a full-time DJ and Electronic Music Production (DJEMP) programme, now rotating between teaching and securing his masters degree at the University of Auckland.