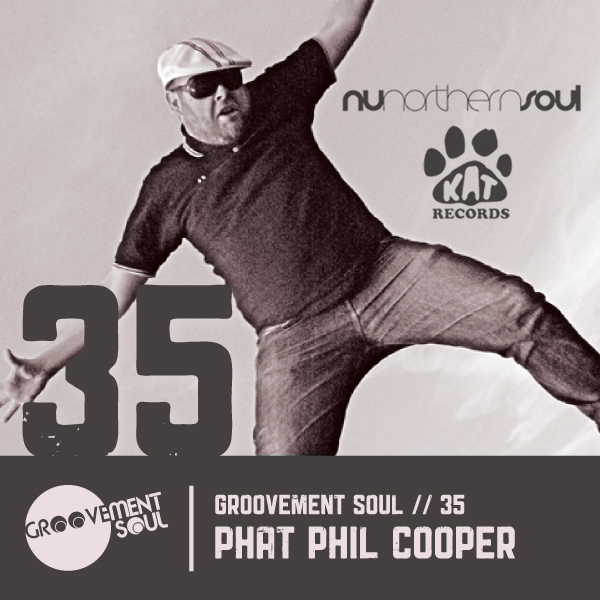 We are delighted to get the inside track and host a lovely chilled out mix by NuNorther Soul and Kat Records label boss man and head honcho Phat Phil Cooper.

Q. The Nu Northern Soul label has a live and chilled sound to it, do you find it hard to meet the talent level you want for the label?
A. One of the reasons for setting it up was there was an abundance of amazing music that was going undiscovered… I think the biggest issue with many amazing musicians and producers is they don’t realise when the track is finished and as a result it sits on their computers / hard drives waiting to be done and dusted, but musicians being musicians they inevitably move onto another amazing piece of creativity… When I met Ben Smith (BJ Smith) he had loads of part finished projects and we went through a load of them with myself suggesting what needed to be done to finalise them. The end result was The Movedrill Projects album which was the labels first release…

Q. With Kat Records, Africa Music Corp and 2Dogs also on the go, what’s the most enjoyable part of running a label – and what part do you enjoy the least?
A: The whole process from discovering the music, the creative work on the packing and then the promo to press, DJs and radio is really enjoyable… The least enjoyable bit is working out the royalty statements and realising you actually lost money on yet another release :o)

Q.Does having a number of labels make it easier to promote music or harder – is there any friendly rivalry between the labels?
A. All the labels have distinct music policies so no real crossover… I have always promoted music via my records stores, podcasts and in essence my DJing, the labels are just extensions of my need to push amazing music in all its genres…

Q. All the releases on all your label hit the shops on vinyl first, is it important for you to continue like this and is vinyl still relevant?
A. That statement is not actually factually correct, we have always tried to release digital and physical on NNS at the same time, KAT was for many years just a vinyl only imprint, but slowly we are also allowing digital… I think vinyl is important and regard NNS as a vinyl label, I base my costings on the vinyl side of things, the digital sales are a bonus of course but I try not to factor them in when working out how much more cash I will be spending…

Q. Apart from the obvious reasons, why did you relocate to Bali and are you planing on staying there indefinitely? Is there a relevant music scene there?
A. Came last August and fell in love with the Island… I don’t see myself residing back in the UK for many years if at all… The lifestyle and health benefits here are amazing for me, musically there are a few interesting people here Mo Morris (Mountain of One), Dan Mitchell (LN – CC, island of the Gods) and Jonny Nash gets here in Feb 2015… Some great resident Djs here also, so far the scene is based around surfers who like to party and general sun seekers, its not been a destination for electronic music lovers, but I predict thats going to change over the next few years…

Q. With so much new music out there all around the world, how do you source new artists for your labels?
A. Through friends, sifting through Soundcloud and Bandcamp and just generally consuming music 24/7… I am the eternal A&R man hahahaha

Q. How do you quality control your releases?
A: I play them out, listen to them on my iPod and live with them for months before committing to a release…

Q: Any new projects in pipeline or have you discovered any exciting new artists?
A: Dos Palos aka Robin Lee [Faze Action] is creating West Coast Psychedelic Soul inspired music for the label… We are planning an album for early 2015, the first single is due Nov 10th [TBC] p,us we have a remix package in the offing from Seahawks, Jonny Nash, BJ Smith and Neil Diablo…

Q. What’s the most fun gig you played out in 2014 and why?
A. The Garden Get Together in Liverpool, sunshine, scouse mates and tons of cider… I was just back from Bali and al the right people came to play… its was ace…

Q. Have you played in Dublin before and, if so, what was your impression of the scene?
A: Played the Red Box quite a bit many years ago, always get steaming drunk and into the craic as you say… But not been for many years, I need to come back and check it out…

Q. What are you listening to in the car and the office today?
A: I dont own a car, but upon the home system, Gilles Peterson on playback, the bandcamp weekly are regular…

From fourth division to premier league is how Phil likes to describe his breakthrough onto the mid 90’s House music scene. Plucked from relative obscurity, DJing at Chester’s “Sweet” House music night in the North West of England to warm up DJ to the underground stars at Cream, Liverpool. All this happened in 1995 and the summer of 1996 saw Phil land the first of his many years’ residencies for Cream at Amnesia, Ibiza. Here Phil was allowed to flex his broad musical styles ranging from hip hop to deep house in his marathon 8 hour sets.
As a regular visitor to the Ibiza since the early 90’s Phil’s understanding and eclectic music tastes really came to the fore, developed and grew. Phil was, and still is a music collector first and foremost. A lot has happened since those early days, music styles, fads and genres come and go, people mature as do their music tastes and Phil Cooper is no exception. What has not changed is Phil’s love of musical discovery and his passion for sharing those musical adventures and journeys into the unknown. Phil has always enjoyed the shared experiences music can bring and being the facilitator of those special times, be that from running off early pause button mix tapes through to DJing and now via his labels and cloudcast series.
With 20+ years under his belt as an international DJ, Phil has been fortunate to combine his love of travelling and music to allow him to dig for vinyl delights in some weird and wonderful locations while also DJing at some amazing parties and festival across Thailand, Indonesia, Australia, New Zealand, USA, Europe and Africa.
Phil currently runs NuNorthern Soul records as an output for his love of music aimed more for listening then dancing to, working with both established and developing artists, NuNorthern Soul has been championed by Gilles Peterson [BBCRadio6], Rob Da Bank [BBCRadio1], Craig Charles [BBCRadio6], and has been regular featured on key stations around the world from Berlin to Los Angeles.
KAT and KAT45 is aimed squarely at the dance floor working, with established remixers and music lovers to put out ‘unofficial’ edits of lost classics, rare records that may have slipped through the cracks get a loving and gentle enhancement.
Phil has been described as a DJs DJ, expect all the geekery of a collector but with all the fun of someone who loves being on the dance floor.